Let me sniff your hand.

Okay, you're a friend. I'll let you in my territory.

Gus
Hi, I'm Gus. You may not have heard of me, but you may have heard of some of my books, even though my name never makes it onto the cover. But I do have a great biscuit hoard to show for all my hard work.

While You Were Stranded (#2)

Women and Men Who Knew the Mortal Messiah

The KEY to Writing Success

My pet and I went to a little place called Harrisburg for a week-long writing retreat. She brought along her friend and fellow writer, Diane, and the three of us hung out and wrote books. Actually, the truth is that I wrote Heather’s words while she took a vacation. I created an entire novella for her. Sure, she and Diane helped brainstorm. A little. But I came up with a funny little novella called Pride and Precipitation. The title was Heather’s. It’s pretty silly, but I try to humor her when possible. After all, she does control the biscuit flow.

I know she won’t have told this story yet, so I’m going to tell it here.

After she and Diane drove into St. George for a Texas Roadhouse steak dinner (all I got was dog food. Okay, okay, my pet brought me some little pieces of steak. I did write her book, after all. I deserved steak all week. But I digress.)

Anyway, when they returned back to the house, where I had been working on the first scenes of Heather’s novella (I do love to write), I heard the car. Excitedly I waited for them to come in.

With my superior sense of hearing, I also heard my pet exclaim, “I don’t have the keys!” And then a frantic exchange. Finally, my pet said, “There might be one window we can open.” (She was wrong. Her hubby fixed it last time they came down, but she didn’t know that yet.)

So they came around where I could see them from my writing chair. Diane brought up a key and tried to pop the screen off, only it bent her key. So my pet started reaching into her pockets and pulled out a ring of something. Keys, I think. (Get it? Keys? Yeah, well, she didn’t. Read on.)

My pet used the little screwdriver on her key ring, but it wasn’t long enough. Then she used her car key, but it was too thick. Then, as she reached for a third key, I could see the lights come on. When she realized she was trying to break into the house with the key that would open the door, she and Diane burst out laughing.

Hey, it was funny in the movie. And, yes, I admit it was funny in real life, too. I tried not to laugh out loud, though. I didn't want to hurt her feelings because I'm just a nice dog.

The key to her writing success isn't a key, though, it's me. Don't you agree that it's a darn good thing she has me to write her books?
Posted by Gus at 11:02 AM 3 comments:

My Wild Night Out

Or should I say my freaking cold night out?!?

Luckily it was a month ago (sorry, I've been busy putting up all of my ebooks for Heather) so the weather was not nearly so bitter cold. Thank goodness.

It was a comedy of errors. No, that's not quite right. It was more like a tragedy of Biblical proportions!

My pet, Heather, always checks on me at night. But (1) she was sick that day. So sick she went to bed early. Usually everyone is in the house for the night. But (2) that night, my buddy Jack and his pet Jarom were in and out of the house because Jarom was packing his pickup to leave the following morning. I followed them outside. And back in. Out. In. Out. In. Out..... Hey, what the freak? I'm still out here!!!

I was outside for about five hours. Shivering. I think I love 20% of my body weight from shivering! It was horrible.

Luckily, a neighbor was driving, early, to the store, and saw me. I ran right over and jumped in his very warm car. Ahhhh. I was rescued. Words like 'guardian angels' were bandied about.

The only good thing to come of the whole experience is that everyone in the house felt horribly guilty and has pampered me more than usual. Long live me!

Actually, one more good thing. Now people in the house know I'm a lot tougher than I look. It's a common mistake. I mean, come on. I look fluffy and cute. Period. Bwahahahaha.

Hope your Christmas is warm and by a fireplace. No shivering for any of us ever again.
Posted by Gus at 12:04 PM No comments:

TWO PAWS UP FOR SERENDIPITY BY DIANE DARCY ... AND A BIG MOVE FOR ME!

Hi, my friends.
I just posted my first official book review and the first post in a series called To E or Not to E (eBook, that is) ... but they're on my new blog site. Please follow me there.
I'm moving my blog to my pet's website at www.HeatherHorrocks.weebly.com.
I hope to see you all there. Please leave me a comment so I know you made it safely.
Thanks, Gus
Posted by Gus at 3:10 PM No comments: 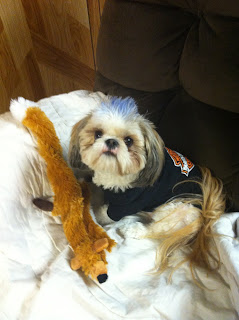 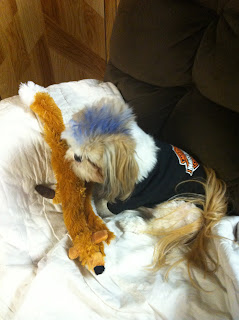 I thought you'd like to see more audition photos.
These two are of me with the weasel I took down.
Notice my killer stare.
The producers especially liked the menace in my steely eyes.
Posted by Gus at 7:18 PM 5 comments:

I thought you'd like to see more photos. These two are of me with the weasel I took down.
Notice my killer stare. The producers especially liked the menace in my steely eyes.
Posted by Gus at 7:18 PM No comments:

I GOT THE PART! 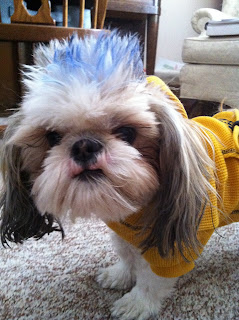 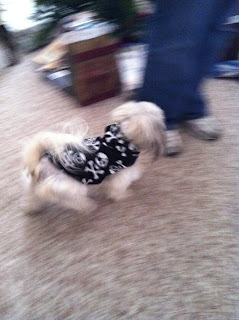 I got the part! And so did my sweetie!
As you can see by the attached audition photos (I'll send more later), I can snarl with the big dogs.
Admit it. I look tough.
The producers agreed. I'm tough enough to play a shark for Land Shark Week videos.
I'm working on the scripts and they're going to be great.
I'm also posting a photo of my leading lady shark, Tashie. Notice how tough she looks in her skull-and-crossbones. That is four pounds of pure mean. Oh, yeah, this photo was taken just seconds before Tashie took this woman down.
Posted by Gus at 7:01 PM No comments:

I JUST AUDITIONED FOR A STARRING ROLE!

I'm very excited. I'll post my audition picture soon to show you how tough I can be. The role will be very demanding. I have been cast (theme music from Jaws here) to play ... the fearsome shark! My victims are being lined up even as I write this. This is a wonderful project and I'm thrilled to be part of it.
Posted by Gus at 10:37 AM 1 comment: